Principale > Libri > Wine Grapes: A Complete Guide to 1,368 Vine Varieties, Including Their Origins and Flavours 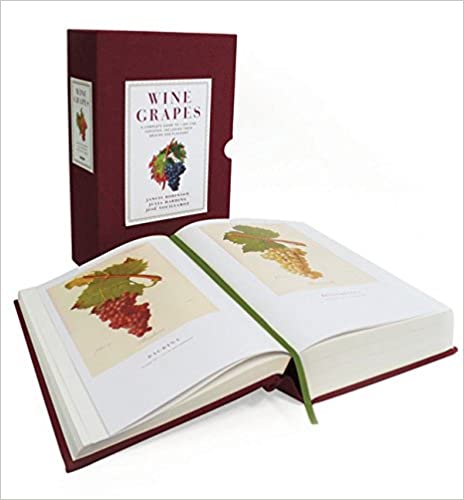 Wine enthusiasts everywhere rejoice! Wine Grapes provides absolutely everything the connoisseur wants to know about the succulent, remarkable fruit that care, love, skill, and time transform into humankind’s most beloved beverage—and presents it all in a stunningly beautiful, gorgeously illustrated package. The dazzling co-creation of Jancis Robinson, one of the world’s best known wine authorities, Julia Harding, who passed the Master of Wine exams at the top of her class, and internationally renowned botanist José Vouillamoz, Wine Grapes is the first complete compendium in more than a century to all grape varieties relevant to the wine lover. An exquisite gift book—and a must-own for anyone in the food and wine industry—Wine Grapes charts the relationships of the grapes (with some astounding family trees), discusses in fascinating detail where and how they are grown, and, most importantly, what the wines made from them will ultimately taste like.

According to Jancis Robinson and José Vouillamoz, Wine Grapes includes details about almost 300 previously unpublished relationship between different grape varieties including the extensive family tree of the Pinot grape that includes a genetic link between the Burgundian wine grape Pinot noir to the Rhône grape Syrah and the Bordeaux varieties Cabernet Sauvignon, Cabernet franc, Merlot and Malbec. The book also details how the Jura wine grape Savagnin blanc descended from the Pinot grape to go on and be the parent vine of several white wine varieties including Chenin blanc, Grüner Veltliner, Sauvignon blanc, Petit Manseng and Verdelho.
Along with research assistant and Master of wine Julia Harding, Robinson and Vouillamoz go on to detail the long history of discovering the parentage of the American wine variety Zinfandel including past research that pointed to a connection between the Italian variety Primitivo and the Croatian wine grape Crljenak Kaštelanski. After years of research and DNA testing of vines from vineyards across the globe, a single 90-year-old grape vine from the garden of an elderly lady in Split, Croatia provided the evidence to show that Zinfandel was originally a Croatian grape known as Tribidrag that had been cultivated in Croatia since the 15th century.
A 90-year-old grape vine found in the garden of an elderly lady in Split, Croatia proved that Zinfandel was originally a Croatian grape variety known as Tribidrag that has been cultivated in Croatia since the 15th century.
Other findings reported in Wine Grapes include the discovery of several species of Malvasia grapes growing in central and southern Italy are actually the Spanish wine grape Tempranillo and that Cabernet franc may have originated in Basque country of Spain. Additionally the origins of the assumed to be French varieties of Mourvèdre, Grenache and Carignan are shown to likely be Spanish instead.
Another detail revealed by DNA testing and reported in Wine Grapes is that several northern Italian white wine grape varieties including Favorita, Pigato and Vermentino are genetically the same grape vine which is known under the synonym of Rolle in France but has no genetic relationship to the Rollo grape of Liguria.

Anteprima
Disclosure of Material Connection: Some of the links in the page above are "affiliate links." This means if you click on the link and purchase the item, I will receive an affiliate commission. I am disclosing this in accordance with the Federal Trade Commission's 16 CFR, Part 255: "Guides Concerning the Use of Endorsements and Testimonials in Advertising."